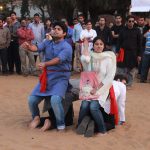 In a world where women play multiple and varied roles, there is a need for generating awareness about their importance in our society.

Samarthan, a student’s initiative under the Centre for Social Sensitivity and Action of Goa Institute of Management organized ‘Rise.Raise.Repeat’, an event which included a street play and flash mob at Miramar beach where over 40 students came together to create awareness on issues linked to women including gender discrimination, dowry, eve teasing etc.

Through the Rise.Raise.Repeat event, the students asked the people to come forward and break their silence on the issues. They also urged people to raise their voice against such social evils to bring about a change in society.

Samarthan, a student’s initiative under the Centre for Social Sensitivity and Action of Goa Institute of Management (GIM), started organizing events under the One Billion Rising banner from 2012, with an aim to spread awareness on issues faced by women.

One Billion Rising, is a global mass action campaign to end violence against women and girls. One in every three women are abused or beaten at least once in their lifetime. That is more than a billion women. So, every year people from all across the world get together to speak in one voice on the issue.